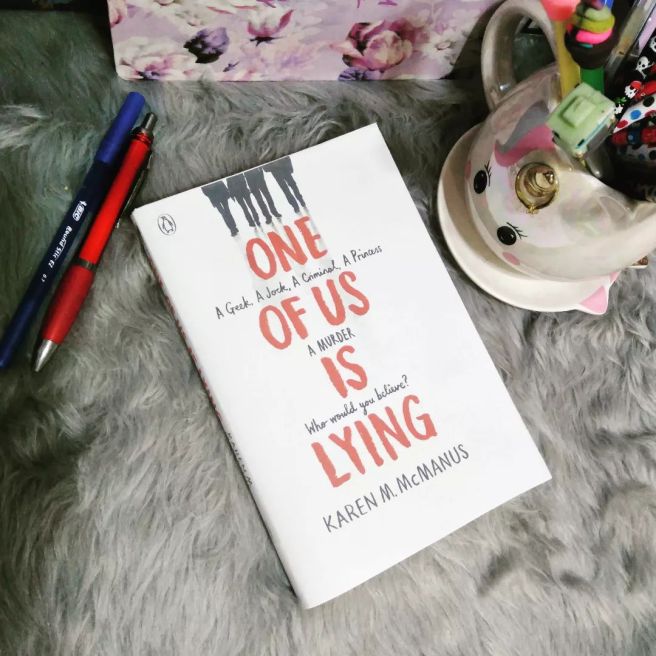 ONE OF US IS LYING

Bronwyn, the brain, is Yale-bound and never breaks a rule.
Addy, the beauty, is the picture-perfect homecoming princess.
Nate, the criminal, is already on probation for dealing.
Cooper, the athlete, is the all-star baseball pitcher.
And Simon, the outcast, is the creator of Bayview High’s notorious gossip app.

Only, Simon never makes it out of that classroom. Before the end of detention, Simon’s dead. And according to investigators, his death wasn’t an accident. On Monday, he died. But on Tuesday, he’d planned to post juicy reveals about all four of his high-profile classmates, which makes all four of them suspects in his murder. Or are they the perfect patsies for a killer who’s still on the loose?

Everyone has secrets, right? What really matters is how far you would go to protect them.

One of Us Is Lying is the story of what happens when five strangers walk into detention and only four walk out alive. Everyone is a suspect, and everyone has something to hide.

I read this book about a couple of years ago and liked it. When Netflix showed me this on my Trending feed last week, I thought to myself, I need to read the book again before watching the TV series. So reread it, I did. The story reminded me again of Gossip Girl, Pretty Little Liars, and How to Get Away With Murder. Still enjoyed the way it was intriguingly written. Captivating and attention-grabber from the very first page.

Imagine this: “She’s a princess and you’re a jock,” he says. He thrusts his chin toward Bronwyn, then at Nate. “And you’re a brain. And you’re a criminal. You’re all walking teen-movie stereotypes.”

I lived for those catfights with the blondes, the detention, the battle of the brains and drugs, the jocks with way too many secrets, and that privileged one who thought he was doing the world a favor with all his revelations and such. I liked that there was diversity among the characters and there’s one kickass granny you’ll certainly wish to meet IRL. Have I mentioned that I loved the criminal and the brainy chick? Yep, NateWyn for the win! (sorry, too cheesy!)

I believe I rated this 4 stars before and will still give it the same rating today.
TV Update: I spent a whole day watching all the episodes and it had me smiling when I was about to sleep. Can’t wait for Season 2!)

First book to finish this New Year. The Red Pyramid by Rick Riordan follows the story of the Kane siblings, Carter and Sadie, as they discover they are descended from both the pharaohs and magicians of ancient Egypt. As a result, they are able to both host gods and wield magic. The duo unknowingly hosts the Egyptian gods Horus and Isis, while their father is taken as a host by Osiris who is captured by Set. They are thrown into an adventure to rescue their father, while simultaneously trying to save the world from destruction. Now, on to the sequel!
I am so in love with this cover! 🖤Happy Release week! Where Skies Fall by @authorcaseybond 🖤
'From Blood and Ash. We Shall Rise.' It's been years since I've read a Jennifer Armentrout book. This one looks promising. Would love to read From Blood and Ash this weekend, if time permits. Wish me luck!
𝗪𝗲𝗹𝗰𝗼𝗺𝗲 𝘁𝗼 𝗪𝗲𝘀𝘁𝗯𝗿𝗼𝗼𝗸 𝗨𝗻𝗶𝘃𝗲𝗿𝘀𝗶𝘁𝘆…
Iter, a tasty prequel to an upcoming book series by @aubriedoes is a short story but I found it packed with awesome sauce! Makes you crave for so much more, literally! Loved it! Highly recommended ⭐⭐⭐⭐ #iter #bookstagram #aubrienixon
Mandatory/Annual November 9 re-reading post... My favorite among Colleen Hoover's novels. One that I had promised to be rereading for years to come, as Fallon and Ben are the very definition of change and character development. From the moment I finished reading it 6 years ago, I knew this is the ultimate romance.