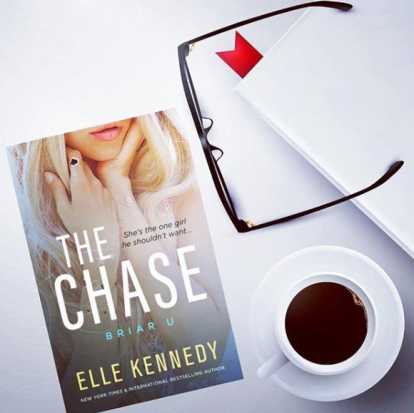 The Chase
(Briar U #1)
by Elle Kennedy

Everyone says opposites attract. And they must be right, because there’s no logical reason why I’m so drawn to Colin Fitzgerald. I don’t usually go for tattoo-covered, video-gaming, hockey-playing nerd-jocks who think I’m flighty and superficial. His narrow view of me is the first strike against him. It doesn’t help that he’s buddy-buddy with my brother.

And that his best friend has a crush on me.

And that I just moved in with them.

Oh, did I not mention we’re roommates?

I suppose it doesn’t matter. Fitzy has made it clear he’s not interested in me, even though the sparks between us are liable to burn our house down. I’m not the kind of girl who chases after a man, though, and I’m not about to start. I’ve got my hands full dealing with a new school, a sleazy professor, and an uncertain future. So if my sexy brooding roomie wises up and realizes what he’s missing?

He knows where to find me.

One of the most anticipated books of last year, The Chase by Elle Kennedy got me all excited and giddy over Colin Fitzgerald. I’ve read about Fitz from the Off-Campus series and he was definitely one of the characters that intrigued me. I missed Garrett, Logan, Tucker and the delicious Dean DiLaurentis. Luckily, Colin aka Fitz awakened my sleeping heart.

Summer DiLaurentis, Dean’s younger sister, transferred to Briar University after a “burning” mishap that happened to her former sorority house. With nowhere else to live, she finally accepted her brother’s offer of living in an apartment with Colin Fitzgerald and his hockey teammates. That wasn’t too bad, except, she liked Colin a lot, but was devastated to learn that he thought so shallow of her. And oh, she kissed Hunter, Colin’s friend and roommate during the New Year’s countdown. So there… One could only hope that Summer won’t be burning another house anytime soon.

I love Fitz a lot. He’s a great hockey player, a talented artist and an avid gamer who’s destined to become the next big thing in the gaming industry. But he didn’t want that much attention to himself. He preferred being in the background, he didn’t like exposing himself to the public. And when Summer came along, he couldn’t bring himself to tell her how much he wanted to be part of her, but not of her world.

Theirs had been a slow-burning romance that ignited the fire in my soul. I love how they didn’t get their acts together at first, and that they built momentum to their relationship. I dunno about you, but there’s something about a guy with tattoos and has passion in sports that really turn me on. Fitz is that guy and Summer is so lucky to have him.

Okay, so as usual, I’m almost a year late reading this series; forgive me for that, Elle. But now that I’ve finished The Chase, I don’t want to waste another minute of waiting to read The Risk. I’m glad I bought the next book immediately or else, I’d die waiting for Brenna and Jake’s story.. or is it Hollis? Ah, either way, as long as this is penned by The Elle Kennedy , I’m sure it’s a sure fire hit on the bestseller’s list!