Off the Record
by Taylor Danae Colbert

Ugh. Celebrities. I mean, I know I took a job as a reporter for the Celebrity and Pop Culture department of our magazine, but it was just supposed to be a stepping stone to the more real stuff.

Despite the fact that Dax Thatcher was the subject of many of my teen fantasies—and I may or may not have an entire playlist made up of his music—he’s still just another star.

Until his golden eyes pierce through me that day on his Malibu deck. I find myself having dinner with him, going backstage with him, lying on the beach with him. I find myself telling him my deepest secrets, and diving deep into his less-than-perfect past.

And then I remember my assignment: a four-issue feature on Dax Thatcher. . .and his supermodel fiancée. Yep, he’s getting hitched.

I have to focus.

I’m a serious journalist, and he is mere months from walking down the aisle with someone else. But that doesn’t stop me from wondering what those tattooed arms might feel like wrapped around me, or how soft the sheets on his California king bed are.

Yikes. This celebrity stuff might be a little more real than I thought.

Dax Thatcher may have been a big star some decades ago, but he still got the groove, the voice and the fanbase from this millennium. He had a new song and album coming out, and a supermodel fiancee in his arms. What more could he ask for? Well, an interview with Shay will eventually change all of this, but up to what extent?

Off The Record by Taylor Danae Colbert is a rockstar romance with the kind of love triangle that you would actually support and love. And then there’s age gap, both between Dax and his fiance, and Dax with Shay. But so what, age gap wasn’t the big deal here. I love stories where the main characters have May-December love affair. This rockstar story got it and nailed it. The love triangle I mentioned above – o.m.g, it was beautiful. I know, I know, love triangles are cliche and too used up already, but I assure you, between Dax, Annaliese and Shay, you won’t regret loving these three together.

Congrats to another hit from TDC and cheers to so much more!! 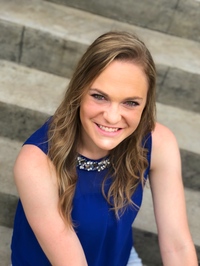 Taylor Danae Colbert is a romance & women’s fiction author. When she’s not chasing her toddler or hanging with her husband, she’s probably under her favorite blanket, reading a book, or writing one. Taylor lives in Maryland, where she was born and raised. For more information, visit http://www.taylordanaecolbert.com