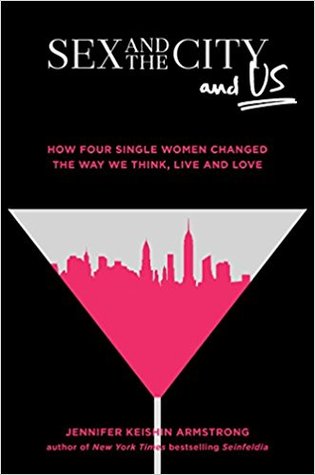 Sex and the City and Us:
How Four Single Women Changed the Way We Think, Live, and Love
by Jennifer Keishin Armstrong

When Candace Bushnell started writing her “Sex and the City” column for the New York Observer, she didn’t think anyone beyond the Upper East Side would care about her adventures among the Hamptons-hopping media elite. But her struggles with singlehood struck a chord, making her a citywide—and soon nationwide—sensation.

Beverly Hills, 90210 creator Darren Star brought Bushnell’s vision to an even wider audience when he adapted the column for an HBO series. His four main characters: Carrie, Charlotte, Miranda, and Samantha, forever branded the actresses that took on the roles, redefined women’s relationship to sex, and elevated the perception of singlehood. With their fashion-forward lifestyle, they launched a barrage of trends, from fabric flower accessories to Manolo Blahnik shoes to Cosmopolitan cocktails.

Sex and the City and Us is the story of how a columnist, two gay men—Darren Star and fellow executive producer Michael Patrick King—and a writers’ room full of women used their own poignant, hilarious, and humiliating stories to launch a cultural phenomenon, pushing the boundaries of television and ignited a national conversation about single women and sex in the process. While the show’s feminist merits continue to fuel debate, it taught viewers—male and female, gay and straight—about sex, and demonstrated that single women could support each other through life’s tribulations, even as men came and went.

I was a big fan of Sex and the City. Carrie Bradshaw was my ultimate fashion muse and her friends were definitely #squadgoals (my favorite character was Charlotte, though). It was interesting to read this new book by Jennifer K Armstrong. Learning about the back story of Candace Bushnell and the author herself, plus the back stories of the fabulous characters and men and women behind the hit TV show was such an honorific opportunity.

It was great to reminisce about TV’s prime and staple show, that launched the careers of actors and actresses like SJP and Chris Noth, and I really was amazed at how the production staff and the people behind the scenes were able to show the best and worst NYC had to offer. I love how the author also interviewed the celebrities involved int he show, and how Darren Star made this show a phenomenon. Quite an interesting read!

One thought on “Review: Sex and the City and Us by Jennifer Keishin Armstrong”