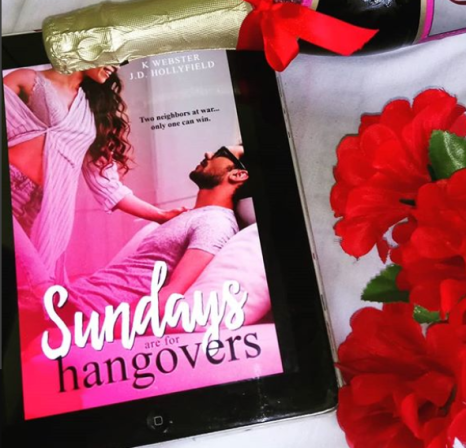 Sundays are for Hangovers
by K. Webster & J.D. Hollyfield

For nearly a year, they’ve been at war.
Cops. Forks. Eggs.
Two feuding neighbors who couldn’t be more opposite, forced to live next door to one another.
Neither is backing down.

She drives him crazy with her loud nineties rap music.
He gets under her skin the way he obsesses over his stupid perfect lawn.

She fantasizes about having sex with the hot nerd—but with duct tape over his dumb mouth.
He has dirty dreams of the bombshell beauty where he bangs the crazy right out of her—nightmares of course.
Anger isn’t the only thing heating up between these two.

They think this is a battle only one of them can win…
The growing attraction between them, though, seems to be far more stubborn than the two of them combined.

I am sorry, I can’t help but really swoon and gush over Will aka Willy Wonka. I don’t know about you, but nerdy hotties always bring out the worst and best in me.

Lilith Hamilton and William Grant had been neighbors for about a year now, but they always clashed over mundane things (although there’s nothing mundane in spilling tacos with sauce all over the front yard or putting gums in the water sprinkler head, isn’t it?) They always annoy and antagonize each other outside their houses, but once they’re  inside their respective doors, they couldn’t quite fight the attraction they felt for each other.

Lil was a free-spirited radio DJ who “rebelled” against her father’s wishes and took each day with carefree attitude and spunk. Will worked as a bank auditor who’s got big OCD issues and wanted peace and order within his premises. Trust me, their crazy neighborly antics and hysterical banters livened up the whole story, from beginning till the end.

I’d like to say, the real star of the book is Bjork, Will’s pussycat.. My my my, this one’s quite feisty… No wonder Lilith always felt threatened by this kitty’s presence. This feline got some real cat-titude that caused a lot of cat-tastrophe in Lil’s life, none of it were meownificent at all.. (okay, I’ll stop with the kitty puns).

But let me tell you this: I have never laughed this hard in my entire life. Everything about this book is intoxicatingly delicious, sweet and spicy. One of my favorite scenes: that radio phone call is the best! Willy Wonka and she-demon Lilith crack me up every single time! All those phone calls really got me going and I am definitely wishing I was there in the book, listening to the two squabble while the rest of Morristown sigh with delight.

And that’s just the tip of the iceberg, I wish I could enumerate the number of times the characters got me laughing like an idiot and rolling on the floor like a lunatic. I can’t further express how much I loved this book. The writing was brilliant, the story, the characters, the chemistry, the steak – all marvelous! Everybody.. This is a must read from the must-follow talented duo – K Webster and JD Hollyfield. Can you tell I’m such a huge fan??

2 thoughts on “ARC Review: Sundays are for Hangovers by K Webster and JD Hollyfield”