Hello sweeties! How was your Valentine’s Day? Hope you all had a great one!  It’s Thursday once again and we’re back with one of my favorite book memes, #ThrowbackThursday created by Renee of It’s Book Talk (https://itsbooktalk.com/) as her way of sharing some of her favorite oldies but goodies books that were published more than a year ago. Check out Renee’s blog to see her TBT this week! 🙂

This week, I am sharing with you one of my favorite Nora Roberts series – The Circle trilogy. I’ve had this book since 2007 and I just realized it’s been a decade since I last read it. So here goes.. (The next books in the trilogy will be featured on my next ThrowbackThursday, so stay tuned!) 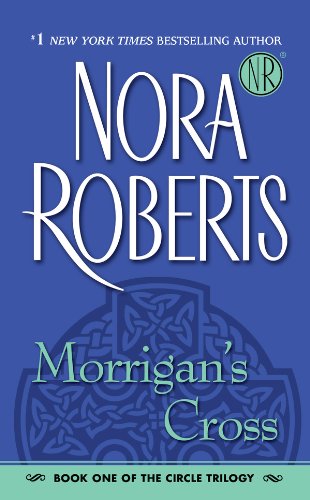 In the last days of high summer, with lightning striking blue in a black sky, the sorcerer stood on a high cliff overlooking the raging sea…

Belting out his grief into the storm, Hoyt Mac Cionaoith rails against the evil that has torn his twin brother from their family’s embrace. Her name is Lilith. Existing for over a thousand years, she has lured countless men to an immortal doom with her soul-stealing kiss. But now, this woman known as vampire will stop at nothing until she rules this world—and those beyond it…

Hoyt is no match for the dark siren. But his powers come from the goddess Morrigan, and it is through her that he will get his chance at vengeance. At Morrigan’s charge, he must gather five others to form a ring of power strong enough to overcome Lilith. A circle of six: himself, the witch, the warrior, the scholar, the one of many forms and the one he’s lost. And it is in this circle, hundreds of years in the future, where Hoyt will learn how strong his spirit—and his heart—have become.

Story starts with the Goddess Morrigan telling Hoyt he had a mission that must be completed by him and 5 others, as told by the prophesy:

“There is a battle to be fought, the greatest ever waged. Good against
evil. You must gather the forces.”

“You must leave this place and go to another, and another still. Some will
come to you, and some you will seek. The witch, the warrior, the scholar, the
one of many forms, and the one you’ve lost.”

..and so the Goddess Morrigan created the Circle to protect the world from the wrath of the uncanny vampire – Lilith – creator of the undead. But before this happened, Morrigan first called upon Hoyt Mac Cionaoith – the sorcerer of the 14th century to gather up the circle and must time-travel to the present to persuade his twin brother into joining…

But how can this be possible, when the sorcerer’s brother was just like the creature that they are trying to defeat – a Vampire??

I love this book the instant I read about Hoyt strongly facing up against his enemy and sworn to protect his family and bring justice back to his “undead” brother..

Basically, the story started in Ireland over 900 years with the goddess Morrigan calling on a circle of six to stand against an immortal enemy. the tale continues as we are transported to present time and the characters found themselves a little bit pre-occupied with the modern world.

Hoyt struggled dealing with his undead brother and building a circle that would destroy Lilith once and for all. I really loved the spin on the brothers, especially how they were going to form the circle of six and hoped that the war would soon be over. Of course, the love story between Glenna & Hoyt was something that made it even more interesting to read. The first fight scenes went so well, I loved it!

I have read Morrigan’s Cross ten years ago, and up to know, it has remained one of my favorite Nora Roberts creation. I actually wished she would write more like this. I enjoyed how she breathe life to her characters. Truly a remarkable talent.  I don’t know about the others who didn’t seem to like how Nora wrote this novel, but I am and always be a big fan of hers.

One thought on “ThrowbackThursday: Morrigan’s Cross by Nora Roberts”