What does a dark but innocent girl do when Death follows her, and hurts all that she loves?

Donnie not being able to take control of her own body during the day of the “recording” was terrifying and hard to believe. Thanks to Marylin, the Goth guitarist in her foster brother’s band (or used to be), is not just any normal Goth. But a practiced Demon summoner looking towards a high seating in Lucifer’s chair. And to do so, he needs an innocent lady who shall be his virgin bride. Donnie was perfect to his set of eyes.
Donnie falling madly in love with her best friend, Ronnie Sykes, was not in her hands to stop it. And as the grieving months passed by she was losing herself into her own heart. Being alone definitely sucked for her when her friends were nowhere near her anymore, her best friend moving to another state, and her foster brother being dead…
Yeah, Hell was on the loose.
Will hope be there for her? Is there a light ahead for her at the end of the road?

“It brought on a memory of my parents. I remembered the screaming, the pants, the gasps, the pain, the cries, and the burn. It also brought on the memory of Mathew dying. I closed my eyes and sighed deep as I counted from ten to one backwards a couple of times, something I learned from therapy a long time ago.
After I reopened them and collected myself I looked into the distance. I couldn’t keep count of how many times I had felt paralyzed lately.
I watched the fire till it all burned into ashes, till there was nothing left of it, till there was nothing left of the evidence just like the memory of my house burning down into nothingness.
I was wrong.
Revenge isn’t always beautiful.”

The story begins with an abandoned child at the footsteps of Dr. Todd Ronalds’ home. He named the newborn child Mathew who was loved and well-taken care of. Fast forward five years later, a girl named Donnie Sparks witnessed the death of her parents due to fire, just one day before her birthday. Tragic, isn’t it? Luckily, Todd came at the right moment and adopted her and raised her as his own. Together, Mathew & Donnie bonded and shared what natural siblings have – a family – a real relationship between a brother and a sister.

It wasn’t long after Donnie grew up and turned into a beautiful goth-like lady, with tattoos, weird hairstyles and piercings on her body, a far cry from what she had envisioned herself as a magical pink princess before her parents’ death. She had a bestfriend – Ronnie, who also played on her brother’s band, whom she was slowly falling in love with. Things got way too complicated when one day, the guitarist of the band, Marilyn, had somewhat controlled Donnie’s mind, causing her to strip her clothes in front of him. That’s when I knew something menacing and disturbing lurked behind his eyes. It was way too creepy and sick with all the deaths surrounding them, .

The book in its entirety is a fast-paced, easy to read and scary! Satanism was introduced in the story, which was really frightening and hair-raising. H’deel Batnij ended the story with one hell of a cliffhanger, a gateway to a more complex sequel that I am sure, is going to be another nail-biting wicked experience. 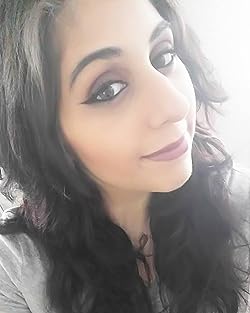 I am a twenty-three year old college student who is currently married to the man of my dreams. I live in Houston, Tx. When I’m not writing, you can find me getting lost in a book, smoking flavored tobacco (hookah) while drinking a mango juice, listening to new music, and attending classes to keep me busy. I plan on taking a BA degree in Literature to teach High Schoolers.
I want to be that type of teacher that gives motivation to her troubled, and untroubled students…Or to anyone for that matter…
Random fact: I like collecting candles.