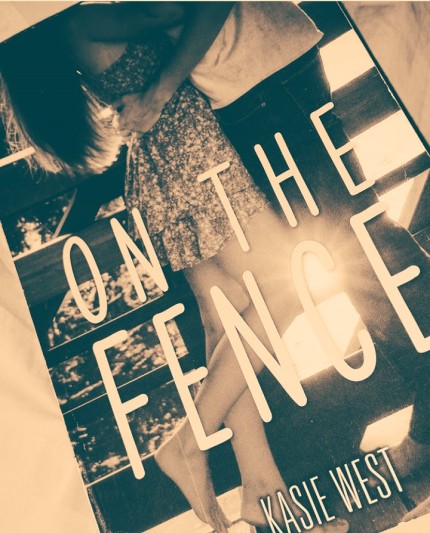 On the Fence
by Kasie West

For sixteen-year-old Charlotte Reynolds, aka Charlie, being raised by a single dad and three older brothers has its perks. She can outrun, outscore, and outwit every boy she knows—including her longtime neighbor and honorary fourth brother, Braden. But when it comes to being a girl, Charlie doesn’t know the first thing about anything. So when she starts working at chichi boutique to pay off a speeding ticket, she finds herself in a strange new world of makeup, lacy skirts, and BeDazzlers. Even stranger, she’s spending time with a boy who has never seen her tear it up in a pickup game.

To cope with the stress of faking her way through this new reality, Charlie seeks late-night refuge in her backyard, talking out her problems with Braden by the fence that separates them. But their Fence Chats can’t solve Charlie’s biggest problem: she’s falling for Braden. Hard. She knows what it means to go for the win, but if spilling her secret means losing him for good, the stakes just got too high.

Charlie may not be your typical female heroine, but she definitely caught my heart when she struggled between being a tomboy and acting weird wither her brothers’ best friend and boy next door, Braden. Her mom died when she was six and she never had a motherly figure attend to her girly needs ever since. Running at night kept her from having nightmares about the night her mother died. Growing up, she became close to her brothers and father and Braden while they treated her like one of the boys.

Until one night when she poured out her heart and worries and secrets to the boy next door. This began their late night conversations and the start of Charlie’s conflicting feelings for him.

This is my first book by Kasie West and I’m loving it. I’ve been dying to read a book by West because I’ve heard rave reviews about all her books. On the Fence didn’t disappoint. The characters were believable, their conversations light and straight to the point, and those nighttime talks over the fence really got me giddy and excited. The makeup scenes were fantastic and really funny, but had also been eye-opening to Charlie, thank goodness! Two of the other minor characters that I loved were Skye and Mama Lu, they were like the ray of sunshine that Charlotte needed to brighten up her day. I hated it when she lied about her mom though.

Braden of course was definitely likeable and yes, he’s the perfect boy next door you’d love to grow up with. Their relationship was one for the books.

Hoping to read the other stories by West, this has been really such a great and charming read! I don’t know why it took me so long to start reading this book. I’ve been so left behind!

2 thoughts on “Review: On the Fence by Kasie West”