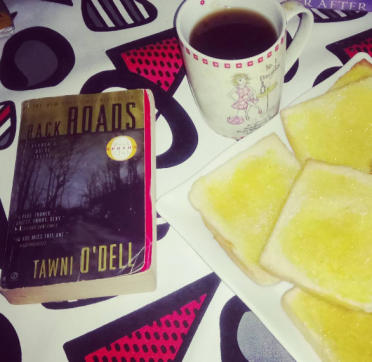 Back Roads
by Tawni O’Dell

Harley Altmyer should be in college drinking Rolling Rock and chasing girls. He should be freed from his closed-minded, stricken coal town, with its lack of jobs and no sense of humor. Instead, he’s constantly reminded of just how messed up his life is.

With his mother in jail for killing his abusive father, Harley is an orphan with the responsibilities of an adult and the fiery, aggressive libido of a teenager. Just nineteen years old, he’s marooned in the Pennsylvania backwoods caring for his three younger sisters, whose feelings about him range from stifling dependence to loathing. And once he develops an obsession with the sexy, melancholic mother of two living down the road, those Victoria’s Secret catalogs just won’t do the trick anymore. He wants Callie Mercer so badly he fears he will explode. But it’s the family secrets, the lies, and the unspoken truths that light the fuse and erupt into a series of staggering surprises, leaving what’s left of his family in tatters. Through every ordeal, the unforgettable Harley could never know that his endearing humor, his love for his sisters, and his bumbling heroics would redeem them all.

His mom is in jail after she killed her husband. So Harley’s got full responsibility to his three sisters who are quite a handful. The eldest finds solace making out with boys in their living room couch.. The second one couldn’t be moved and the youngest is alarmingly as sweet as syrup. These girls need guidance from a woman, in my honest opinion, but all they got is Harley who isn’t particularly happy nor charmed with the setup. But he’s got no choice but to be the man in the family, and man, he needs all the boost he can get, especially with that lovely mother he’s recently got his eyes on.

Now if only he can give sympathy to his siblings without thinking of strangling them one by one. And if only his mother didn’t fired up that gun…..

I bought this book almost 10 years ago when I learned that this was part of Oprah’s Book Club. I thought, if Oprah liked it, I guess I would too. But as I read the pages one by one, I got this inexplicably sick feeling about Harley and the way he treated his sisters. I couldn’t point my finger on it, I just knew it was giving me the creeps. A week later, I realized I’ve been stuck at the same chapter for a couple of days and couldn’t bring myself to proceed. So I abandoned this book and left it on my box of DNFs. 😦

Now my sons found my old stash and I saw this book, like it’s begging me to read it. So I decided to reread it. Now I realize why I wasn’t able to finish this book before. It was about a dysfunctional family struggling with a series of unfortunate events that befell them. But this aint’ magical like the other book – no, Back Roads is gritty, dark, brutal, savage. My mind couldn’t handle it then, honestly, i still can’t, but I did it! I’d like to think that I am now more mature and open-minded and so I was relieved when I finally finished reading this book. My mind exploded into small pieces, you’d be picking my brains scattered on the floor.

This.Is.Mindfuck. Is it HEA? How I wish! Ugh. This is still giving me a headache. I wonder how Oprah managed to finish it.

"Wherever you need to go - the Map to Everywhere can take you there. " I'll be reading this today to my youngest, who's been interested lately with pirates, wizards, magic and adventures.
"I leave you alone for two minutes, and the wolves descend." Between the vampires and werewolves, I am more inclined to join the wolf pack. Sure wouldn't mind rereading this until the wee hours of twilight.. Take me back to Forks, WA. #twilight #twilightsaga #bookstagram
★★★ NEW COVERS ★★★
So thrilled and happy to receive these awesome gifts from author @jodigallegos_ These arrived a few days ago and they're also gorgeous!! Thanks so much Jodi!! Reading High Crown Chronicles tonight 👑🌃🌙
Last night, Kurt was restless because he's getting vaccinated today. So we read this book, Betwixters: Once Upon A Time, a beautiful story about a young boy and his friends who bravely fought bullies and Scaretaker and shadow wolves in order to save a dying Faerie and bring her to the Vathylite Realms. Surely today, our little Kurt is ready to face the world ahead of him. #bookstagram #betwixters #betwixtersonceuponatime #shadowwolves #winterwolfpress #booksofinstagram
O.m.g. what was I thinking not reading this immediately when I bought it? I couldn't even begin to tell you how much I epically love this! Teenage angst, teenage pregnancy, broken marriage, awful secrets - yep, I loved for this kind of stories nowadays hahaha. But seriously, it was a good read. I may not be a big fan of either Morgan and Clara, but I liked that they've come full circle when they needed to. As a mother myself, I know this innate feeling of extreme protectiveness when it comes to your children. It's a crazy feeling. I love how Colleen Hoover continuously makes me feel crazy about her and her stories. She's my lobster, I think. ⭐⭐⭐⭐