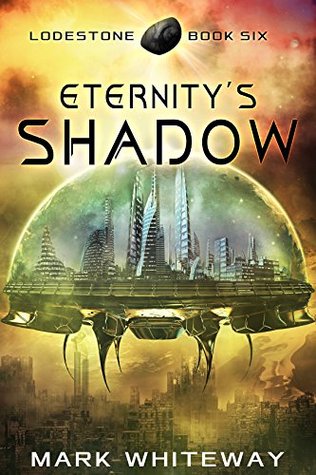 With her old adversary, Glaisne, now loose on Helvena along with the fey creature, Ash, Keris of the Kelanni must risk everything by awakening an ancient power so dangerous that it could destroy both worlds…

Having read Book 5 of the Lodestone series, I knew I was in for another exciting journey above the stratosphere with Eternity’s Shadow, book 6 from the Lodestone Series by Mark Whiteway. We follow Keris who is now the head of the Division for the Maintenance of World Order (quite a mouthful, eh!) as she attempted to locate the Ancient girl. Instead, she came upon a bloody foliage, displaying a recently dead Chandara while her own sharp staff was drawn. Then two other Chandaras eerily came down and suspected her of murdering their own specie. Things got really more intriguing and interesting when another murder was reported, implicating Keris furthermore. And Alex McCann certainly got embroiled again in yet another war at hand. The ending was heart-breakingly epic, I didn’t know how to react knowing there’s still a lot that’s going to happen soon!

Eternity’s Shadow is full of surprises, action and heart-pounding scenes. I couldn’t help but imagine myself playing Keris while reading the book. The story becomes more interesting in every page. There are deaths, betrayals, deception, forgiveness and surprises. As always, Mark Whiteway’s writing is beautiful and powerful. He knows how to pique the interest of the readers to keep them glued to their seats and their eyes fixed on the book. The world and storylines he created makes Eternity’s Shadow an even more compelling and must-read.

Mark Whiteway (1959- ) lives in rural West Sussex, England, near the former home of H G Wells. The Lodestone series of novels is built around the concept of negative matter-an extension of Einstein’s Theory of General Relativity.