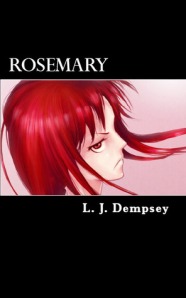 She doesn’t know what she is. Or why he chose her. Or where his demons took her son moments after she gave birth.

What she does know is she will find her son no matter the cost, and anyone that gets in her way will stand aside—or be destroyed.

Rosemary, a woman who relies on little more than her own two fists to get by, lives the life of a wanderer. While scouring the kingdom of Gratia for her son, she encounters Prince Courtney Delouise deGratia. This vainglorious prince who cares for nothing but beauty gives her the first solid lean on her son she’s ever had, yet his merest touch drains her of vitality. As long as he can help her nearer her goal, however, Rosemary care what effect the prince has on her. But the journey she begins with him will not be like before. It will test her both physically and mentally. It will force her to face her past. It will hurt her. And it will changer her into the very thing she resents the most: a demon.

And in Gratia, there is a Holy Order that ensures demons do not walk among man for long.

Rosemary takes you on a crazy roller coaster adventure far beyond the world that we have been used to. This debut novel by L Dempsey proves to be quite a catch. I was actually hooked right from the first page and was captivated until the end!

The story starts with Rosemary involved in a bar fight. No, she wasn’t the damsel in distress waiting for someone to save her from unruly men. Quite the opposite, actually. Rosemary was the one who brought the men down to their knees clutching their throats after unashamedly checking her out. Serves them right, I might add. Then a prince came to the tavern where the commotion happened and offered Rosemary to be his fiance. In a sudden turn of events, we see Rosemary getting helpless at the touch of the vainly prince and agreeing to his whims. Soon, they got into an agreement and journeyed together to help her find her long lost son and met an uncanny group of characters along the way.

Rosemary is someone you wouldn’t want to mess with! She isn’t your average heroine in the book. A buxom redheaded woman, with red eyes and strong arms, Rosemary could easily transform into a demonic being when her patience is tested. She resembled fire, thus her character is feisty, fiery and headstrong. The other characters, Envy, Vain, Pride, et al, all befit their personalities, making this story a riot, interesting and heart-pounding story. Angels, demons, shapeshifters, these otherworldly beings make the Lineage of Seal series a really highly anticipated one!

I will eagerly await the next book in the series. This is a highly recommended book for everyone who is looking for an engaging and adventurous story.